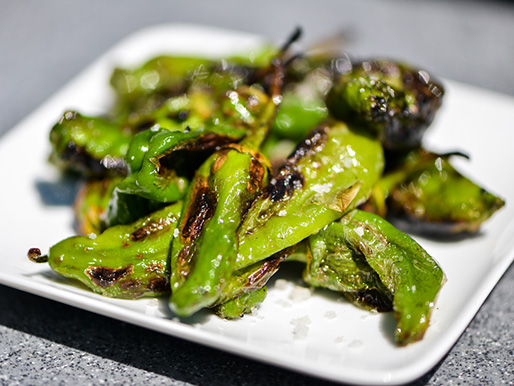 Tomorrow, we begin our annual Languages and Cultural Festival in school, something we’ve done for I think ten years now. It will culminate, as always, with every class performing a song, playlet or rhyme in French on our battered stage.

One feature of the week is a cultural food-tasting opportunity. This allows the children to get a taste for unusual foods from France, Spain, Italy, China etc etc. Except they’re not that unusual now – if you know where to look, you can get a remarkable variety of world food within a 30-minute drive.

My wife and I even bought ‘pimientos de padron’ this year in Aldi. I normally have to wait several months before arriving in Spain and gorging myself on these little green peppers in the local sidrerias. Now, their allure has disappeared somewhat, knowing I can get them anytime in St Helens.

So you’d think that with this smorgasbord of exciting and varied food, families would be eating a diet that was equally rich and diverse?

Not according to Public Health England who now estimate that 22,000 children are severely obese by the time they leave primary school. Their report paints a worrying picture of greater obesity levels, a problem which seems to have a relentless and worrying momentum, linked as it is to increased cases of diabetes and heart disease. The government’s own 2018 update to its initiative ‘Childhood Obesity: A Plan for Action’ couldn’t be clearer. It puts it starkly,

‘The burden is falling hardest on those children from low-income backgrounds.’

Following public release of the Public Health England report, there were the usual calls for schools to do more in educating children and families in a balanced diet, and serving good, wholesome and varied food during their lunchtimes.

My perception is that this is rather like asking all train drivers to sort out the problems at Northern Rail. We’re ignoring the wider, structural problem that is… well…a pretty obese problem.

Felicity Lawrence highlighted this in an excellent piece in the Sunday papers last week. She visited an innovative London bakery that was providing homemade bread for schools at a reduced cost; in doing so, it had started to break the habit of local families of purchasing the slicy, starchy, tasteless stuff. The article shone a light on the economic angle that is at the root cause of the childhood obesity problem. Put simply, bad food is cheap. It is piled up high in almost every shop within areas of socio-economic deprivation, whilst the organic, natural, delicatessen-style shops and bistros migrate to areas of hipsterland where people are prepared to pay huge amounts for a freshly-baked raisin ciabatta. On the other hand, if my example of ‘pimientos de padron’, available in Aldi for £1, is to be believed, then it could be that things are changing.

How you arrest this widening culinary division is not going to be easy and will take national leadership of a quality not currently on the horizon. Meanwhile, individual organisations, community groups, councils and, yes, schools can all do their bit to at least temper the most iniquitous impacts on our children.

In Anfield, the wonderful Red Neighbours and start-ups such as Homebaked and Apple of My Eye are doing great work in promoting wholesome cooking and helping people realise that it’s possible to cook very cheap meals which are tasty, nutritious and quick to make. The key job of schools is to co-exist alongside such organisations and work in tandem. Like so many other contextual, modern societal issues (pressures on parents, transport, social media, radicalisation, anti-social behaviour, mental health) there has to be a joined-up plan of action that involves all those within the community. Schools should not act in isolation. And a few thousand pounds given through yet another knee-jerk government initiative will not do anything; it just gives the illusion that something is happening.

This leads me on to my final point, that of balance.

In my opinion, it is wrong to act as the Food Police. Nanny-state hysteria about ‘banning sugar’ or ‘banning packed lunches that contain chocolate’ or ‘war on fizzy drinks’ is patronising and could well be counter-productive. We should be championing balance, a love of food and an enjoyment of mealtimes – the more children’s tastes are developed, the more food they enjoy, the more likely it is that they will get somewhere close to a balance in their eating habits. And, yes, this is something schools can, and should, do. But the rhetoric has to be a positive one.

Our Languages and Cultural Festival is but a nibble into a particularly chewy burger. At its root, this is an economic problem exacerbated by the widening divisions in our society. Back to the article. ‘Obesity is the canary in the mine. It tells us there is something seriously wrong with not just the food system, but the whole economic system.’

But lots of nibbles can, and will, make a difference.